Description from Goodreads:
Running away brings Rhine and Gabriel right into a trap, in the form of a twisted carnival whose ringmistress keeps watch over a menagerie of girls. Just as Rhine uncovers what plans await her, her fortune turns again. With Gabriel at her side, Rhine travels through an environment as grim as the one she left a year ago - surroundings that mirror her own feelings of fear and hopelessness.

The two are determined to get to Manhattan, to relative safety with Rhine’s twin brother, Rowan. But the road there is long and perilous - and in a world where young women only live to age twenty and young men die at twenty-five, time is precious. Worse still, they can’t seem to elude Rhine’s father-in-law, Vaughn, who is determined to bring Rhine back to the mansion...by any means necessary.

In the sequel to Lauren DeStefano’s harrowing Wither, Rhine must decide if freedom is worth the price - now that she has more to lose than ever.

Lauren DeStefano has done it again. She has written yet another book that is so completely hideous it's beautiful. And if that makes no sense to you, I suggest you pick up The Chemical Garden books. Lauren's writing is so completely compelling, it was practically impossible to put the book down to do the simplest things, like sleep.

One of the most wonderful things about Fever is its ability to stay in your mind. Even when I did manage to put this book down to do regular mundane things, my mind was churning with what could happen next, or the meaning of certain aspects of this book. Just like in Wither, I worried about reading this book because it contains such an ugly, cruel world that I'm never really sure I can stand to read about. And same as in Wither, Lauren DeStefano alleviated those concerns easily with her writing.

Still, though I did enjoy this book, I must say that I did like Wither better. I felt like there was more purpose in Wither than in Fever because the characters get sidetracked a bunch. In the first book, there was a direct prupose and it was aimed for from page one. In this second book, it seems a bit skewed and off-track. Nevertheless, this was a great book that I really enjoyed.

Character rundown: Rhine. I'm not a huge fan of Rhine. She's not a bad character, and she definitely cares about her brother, but other than that, she seems somewhat selfish to me. Not overly selfish, but enough that it gets on my nerves. She's not that hard to tolerate, though, when inserted into such a riveting story. Gabriel. We still know very little about him. I was hoping that we'd learn more about who he is and his past, but that just didn't happen. Linden. OH, LINDEN. He's not in this book all that much, but what we do see of him, I really like. He's definitely going through some character growth, and it's certainly in a direction I like. Who doesn't love a character who learns to stick up for themself?

The ending. I can't even put this ending into words. HUGE cliff-hanger. I have to say that it did emphasize one thing that I really like about this trilogy--how well these books connect. They're like one big story, and we just get it in pieces. I love seeing how each little part clicks together. Now we just need the third book--Sever--to be released!

Overall, this was a really great book. It just adds to the possibility of this being one of my favorite trilogies of all time. If you've read and enjoyed Wither, Fever may not be as wonderful as that, but it definitely meets expectation, and I urge you to pick up this second installment. 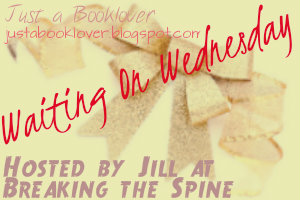 ﻿Waiting On Wednesday is a weekly meme hosted by Jill at Breaking the Spine where we tell y'all about the books we cannot wait to get our hands on!

Yesterday was the release day for Onyx. ﻿We all know how incredibly happy/excited/etc I was about that. Weeeell, in honor of that, this WoW is for another book by Jennifer L. Armentrout. Plus, I'm really excited for this book, too. I read the first chapters on Jennifer's website, and they were just . . . AH.

So, this week I am waiting on:

Ember operates on a no-touch policy with all living things--including boys. When Hayden Cromwell shows up, quoting Oscar Wilde and claiming her curse is a gift, she thinks he’s a crazed cutie. But when he tells her he can help control it, she’s more than interested. There’s just one catch: Ember has to trust Hayden's adopted father, a man she's sure has sinister reasons for collecting children whose abilities even weird her out. However, she’s willing to do anything to hold her sister's hand again. And hell, she'd also like to be able to kiss Hayden. Who wouldn't?

But when Ember learns the accident that turned her into a freak may not've been an accident at all, she’s not sure who to trust. Someone wanted her dead, and the closer she gets to the truth, the closer she is to losing not only her heart, but her life. For real this time.

All right, so what are y'all waiting on this week? Tell me in the comments! 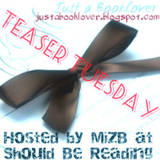 Do you want to participate in Teaser Tuesdays? It's simple and hosted by MizB from Should Be Reading. All you have to do is:
-Grab your current read
-Open to a random page
-Share two (2) "teaser" sentences from somewhere on that page
-BE CAREFUL NOT T INCLUDE SPOILERS! (make sure that what you share doesn't give too much away! You don't want to ruin the book for others!)

-Share the title & author, too, so that the other TT participants can add the book to their TBR if they like your teasers!

﻿All right. So. ONYX RELEASES TODAY!!!!!! I have been so incredibly excited about this since the moment I finished Obsidian. At the time I'm writing this post, I don't have Onyx yet, but I AM doing a teaser from Onyx.

"His lips tipped up one side and he leaned toward me, his mouth inches from mine. 'Come and get it.' Come and get...? Daemon placed half the cookie between those full, totally kissable lips. Oh, holy alien babies everywhere..." ~pg. 6, Onyx

Yeah. Reading about that cookie never gets old, does it?

Another thing--isn't that cover AMAZING? I know. It totally is. I could look at it all day.

Okay, so now since we read that teaser, I KNOW we want to see the trailer again, yes? I originally posted the trailer (along with the trailer for Obsidian) on Sunday (click HERE for the link). Mmhmm, before I even explained my absence. It's called priorities, people ;)

Seriously, here's the trailer again for your/my/all of our viewing pleasure.

That's all I have for today. I hope you all have a very wonderful Onyx release day! Feel free to share some of your teasers in the comments, and I'll get to them when I get done drooling over that trailer.

All right. So, I'm back. Clearly. For those of you saying "You were gone?"  . . . YES. I WAS. But all is well because I'm back. Why was I gone without any explanation whatsoever? Well, there's a long explanation and a short explanation. Since I am perpetually lazy and we all want to get to the giveaway, I'll give you the short reason. Ready?

My computer was broken.

For the record, if you emailed me or something, I'm working on getting to it, I promise. I just have something like a gazillion emails right now, and a bunch of reviews/posts/etc to write, so I ask you to please be patient. I appreciate it so much.

Now, I am incredibly sorry for neglecting my blog for something like a whole flipping month. Ugh. I don't even like thinking about it. Still, sometime between the last time I posted (well not including yesterday's post, obviously) and now, I've gained A BUNCH of followers. I was nowhere near the 80 I have now then. So, I must say thank you. Thank you so much. You guys are awesome.

And because you're awesome, I'm having a giveaway!

Guidelines:
﻿-Fill out the Rafflecopter form below to enter
-Contest will end at 12:01 a.m. on 8/21/2012
-There will be one winner
-This giveaway is international as long as the Book Depository ships to you
-Must be 13 or older OR have parent permission to enter
-Be sure to check out my giveaway policy for the full list of rules for my giveaways
a Rafflecopter giveaway

All right, have a great day, Friends! Oh, and ONYX releases tomorrow!!!!!!!

Email ThisBlogThis!Share to TwitterShare to FacebookShare to Pinterest
Labels: giveaway

I've been away for a while, and I promise you a post with an apology, explanation, and quite possibly a giveaway very, very soon. But for today, I must post these trailers.

BECAUSE THESE BOOKS ARE AMAZING.

Truly, they are. And the trailers? So great. Seriously, like, clapping-my-hands-together-jumping-up-and-down-and-squealing-a-little-bit great. Which I suppose makes "great" a bit of an understatement. But you get my point. Or, if you don't, you can watch the trilers for yourself!

First, the Obsidian trailer:
*fans self* Yeah. How can one not love Pepe and Sztella? They are the PERFECT portrayals of Katy and Daemon. EEEK! Such a great trailer.

Now, for the Onyx trailer:

Mmhmm. I cannot wait to read this book. TWO. MORE. DAYS. I may spontaneously combust between now and then. So amazing.

All right. That's what I had to show y'all for today. What did YOU think of the trailers? Truly amazing things, I know. Be on the look out for my post where I apologize/give things away/etc. It'll be posted either tomorrow or Tuesday. But probably tomorrow because I'm most likely going to need Tuesday to gush. Still, not sure, though.

Have a great day, Friends!
♥Jessica(:
Posted by Jessica @ Stuck in Books at 4:52 PM No comments: