All the King's Men Blog Tour: Review of The Kings of Charleston by Kat H. Clayton!

Welcome to my stop on the All The King's Men blog tour! To see a full schedule for this tour, either click on the banner above OR (because links tend to, you know, NOT work for me), click HERE. :)

The Kings of Charleston by Kat H. Clayton 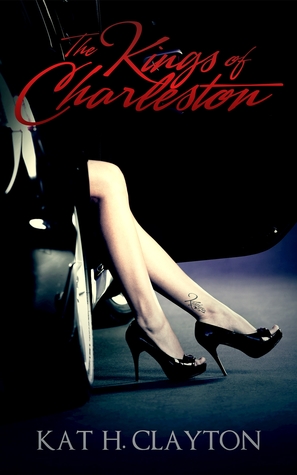 Description from Goodreads:
Casper Whitley is forced to move to Charleston, South Carolina where she’ll be the new kid her senior year of high school. Casper’s upset about the move until she meets the Roman family’s gorgeous son, Cal, but there’s a problem. A mystery surrounds him which can be summed up in one word…Kythera. Never heard of it? Neither has Casper until she finds the word tattooed on cars, paintings and all her new friends.

After Casper’s life is threatened, someone is forced to tell the truth about her parents, the Romans and Kythera’s motives for her being in Charleston. Once the truth is revealed, she must decide whether to protect her family and Kythera’s secrets or walk away from everything she has ever known.

The Kings of Charleston has a really intresting premise. That was what drew me in in the first place. It seemed mysterious and cool and I thought I'd have fun reading it. Add to that the fact that there was--OHMYGOSH--some romance in here? I OBVIOUSLY needed to read this book.

Now that I've read it, I know I was right to look forward to the mystery. It was interesting, riveting, and kept me on my toes. The romance, however, wasn't really much to write home about. It wasn't BAD. It was not. But it didn't really take my breath away, either. It was just kind of THERE. I'm not going to lie, though--there were a couple romantic moments I swooned for. Just not as many as I expected.

Character Rundown:
Casper: Her name is kind of awesome. Just saying. But anyway, Casper was...all right, I suppose. Her character didn't blow me away or anything, but there were things about her that I liked. She was pretty confident, for one. And she could actually be strong, in some situations, and I liked that. So Casper does not go on my MC hate list, but I don't really loooove her, either.

Cal: So, he's my boy (for now), obviously. But he didn't seem all that original. He was super mysterious, but other than that, he was pretty...normal. What we usually see from guys in YA. I must admit, he was a TOTAL sweetheart, though. I swoon, y'all.

Plot. There are SECRETS. The kind that you will guess and guess, but never get quite right. I personally did not guess anything EXACTLY right until the author wanted us to. The mystery portion of this book really held its own. Big time. It was so enjoyable.

Romance. I just was not feeling it a majority of the time. There were moments where I was TOTALLY into it and swooning my drool off (um, HORSES, anyone?), but more often than I would have liked, the romance just did not seem very special to me. It was not bad, it was just commonplace. The kind we see all the time in YA. Expected. You know?

The ending. Well, I'm definitely going to be reading the next book! I was happy with the ending, and what Casper decided to do. And then what Cal decided to do. If they were real people, we'd be high-fiving right now. BOOM.

Overall, The Kings of Charleston was a great mystery that held me captive from the time the mystery began to the very last page. However, the romance didn't live up to my expectations. So, if you're reading this for the romance, prepare yourself. If you're reading this for the mystery, I salute you. You'll have so much fun!! Kat Clayton has written a rather wonderful mystery novel here. You'll want book 2, guys. You really will. :)