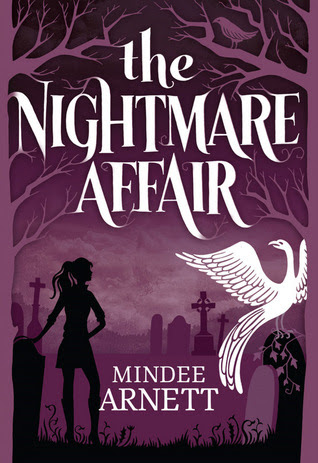 Description from Goodreads:
Sixteen-year-old Dusty Everhart breaks into houses late at night, but not because she’s a criminal. No, she’s a Nightmare.

Being the only Nightmare at Arkwell Academy, a boarding school for magickind, and living in the shadow of her mother’s infamy, is hard enough. But when Dusty sneaks into Eli Booker’s house, things get a whole lot more complicated. He’s hot, which means sitting on his chest and invading his dreams couldn’t get much more embarrassing. But it does. Eli is dreaming of a murder.

Now Dusty has to follow the clues—both within Eli’s dreams and out of them—to stop the killer before more people turn up dead. And before the killer learns what she’s up to and marks her as the next target.


Favorite Quote:
So, I'm supposed to pick a favorite quote from this. And. I know people won't think this is that amazing, but here's what I picked...
"Eli too hold of my arms and lifted me as if I were a toddler. But then his foot slipped on the wet floor, and we went down again. I landed on top of him, my face pressed against his stomach. Nobody's abs should be that hard."
Why did I choose that?
"Nobody's abs should be that hard."
Am I the only one amused by that? HA! He sounds hot, though. Seriously. Read and find out. ;)
About the Author:

Mindee Arnett lives on a horse farm in Ohio with her husband, two kids, a couple of dogs, and an inappropriate number of cats. She’s addicted to jumping horses and telling tales of magic, the macabre, and outer space. She has far more dreams than nightmares.
www.mindeearnett.com
twitter.com/mindeearnett
Giveaway:
A tour-wide giveaway for TWO signed copies of The Nightmare Affair! Also, the giveaway is international! Eeep!
Just enter through the Rafflecopter, kind people. :)
a Rafflecopter giveaway
**I am not responsible for this giveaway in any way, shape, or form. Wish I was, though. IT'S SO COOL.**