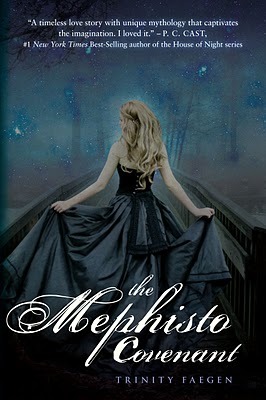 Description from Goodreads:
Sasha is desperate to find out who murdered her father. When getting the answer means pledging her soul to Eryx, she unlocks a secret that puts her in grave danger--she is an Anabo, a daughter of Eve, and Eryx's biggest threat.A son of Hell, immortal, and bound to Earth forever, Jax looks for redemption in the Mephisto Covenant--God's promise he will find peace in the love of an Anabo. After a thousand years, he's finally found the girl he's been searching for: Sasha.With the threat of Eryx always looming, Jax knows he has to keep Sasha safe and win her over. But can he? Will Sasha love him and give up her mortal life?

What drew me to this book was the fact that romance seemed to be the dominant aspect. They need to fall in love for his redemption--and it isn't just a dramatic teenage thing. It's a legit situation. I was so pumped to read that and see how things went for Jax and Sasha. All in all, I wouldn't say The Mephisto Covenant disappointed me, but I wouldn't say it was as wonderful as I was expecting it to be, either.

First there's Sasha, who was okay. She wasn't AMAZING or anything, but I didn't completely dislike her, either. She was going through a very suckish situation and dealing the best she could. Do I like the way she dealt with every single thing? Nope. But she didn't do anything too crazy that I wanted to slap some sense into her, either. The only big thing that bothered me was how Sasha took care of the situation with Jax. I get that it was all way out of left field, but it still bothered me that she was so standoffish about everything he had to say and then BAM accepted his help the moment she needed it. She works through that problem, though, which I obviously approved of.

Jax wasn't a bad boy. For all intents and purposes he should be. He was supposed to be. But he wasn't. Pretty sure Sasha had something to do with that. Goodness knows how reckless he might have been before he found Sasha and focused on her. And you know what? I liked that he was so conscientious of Sasha. It showed that he could be a great guy, and I much preferred seeing that side of him as opposed to the brief descriptions of how he was before. And now I totally heart me some Jax.

The romance was actually really nice. Sort of insta-lovey, but I was expecting that going in. It's actually central to the story, so it didn't bother me. Plus, I loved watching their romance develop as the story progressed. At first, it was just a sweet thing that they were looking at in an Anabo/son of Hell way, but then later it turned sweeter and into something that was just them feeling their feels. And yeah, I loved that.

I'd say the biggest issue I had with this story was the world-building. I pretty much understand everything (or at least I think I do), but there was too much info-dump. Not only that, but it happens more than once. With the SAME information. I understand why it happened--Sasha gets her memory wiped at the beginning of the book after she learns a bunch of stuff. But OUR memories weren't wiped. I don't see why we had to go through so many double explanations. Sasha needed them. We didn't.

The writing was good, though I would have preferred the story in first person POV. I liked that it was dual POV, but I feel like I could have gotten more into the story if I'd ACTUALLY been in the characters' heads, you know? There's something more connected about first person, and I tend to be partial to it. Not saying I don't adore any books in third person (ALL of the L.J. Smith books, anyone?), but with some stories, I feel it'd be a better experience from first person.

Overall, I really liked The Mephisto Covenant. I fell for Jax, ended up on good terms with Sasha by the end of the book, and adored the whole premise. Though this book wasn't all I expected it to be, I found it enjoyable regardless and totally plan to read the next book in the series.