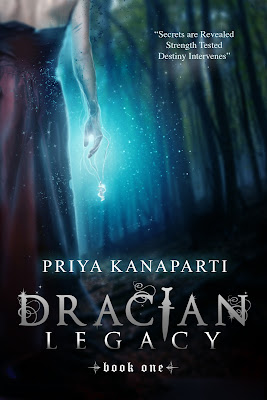 Description from Goodreads:
Ren and Axel are caught between two powerful magical races: one destined to end the bloodshed, the other out for vengeance.

Seventeen-year-old Ren Pernell is prophesied to end the war between the Dracians and the Telalians. So when a Dracian, Axel Knight, is sent to find and bring back the prophesied one before she turns eighteen and Telalians discover of her existence, unexpected sparks start to fly between the two. Once Ren finds the truth behind Axel’s arrival, she wants everything to do with him and nothing to do with his mission.

Things prove to become difficult as Ren’s life is constantly threatened by the Goarders, humans who sold their souls, a Proxy Succubi, and the leader of the Telalians, who has been searching for her as well.

With the clock ticking and Ren’s life in jeopardy, it is no longer just a mission for Axel. It becomes a personal endeavor to save the only one he’s ever loved. In a heart racing ending, they must find a way to evade the preordained war that won’t also end Ren’s life.

You may or may not know this, but I've been seriously pumped about this book for a while now. Ever since November when I was sitting in English class--TOTALLY doing the work I was supposed to be doing--and I got an email from some random author asking if I'd like to participate in the cover reveal for some random book. I said yes, because I'm nice like that AND this book seemed kind of cool. I knew little to nothing about the book then, but it stil caught my eye. It seemed. So. Cool.

Guys, this book was so much fun. And the characters make me smile so hard. And then the story, as I said it was fun to read. I liked how everything was kind of vague going into it, but then as I read more and more I started to understand and things started to click and I found out that this book is NOT about vampires--for some reason, I thought it was at first. Ha. (Nothing against vampires, I am merely making an observation.) Plus, I did some spazzing at some certain parts of this book. It was the good kind of spaz. The kind I LOVE when books make me do it.

Character Rundown:
Ren: Ren actually wasn't that bad. Which will probably surprise some people *cough*Perez*cough* because I always seem to NOT like the female MC, apparently. But Ren was cool. She was nice but not a pushover. Completely stubborn, but in a way that amused me to no end. (Rotten eggs! You'll get that when you read, I promise.)

Axel: He is such a sweetheart. There is almost always a sweetheart in every book I read, and Axel is most definitely it here. He's protective and makes my heart all kinds of happy. And he's a soldier, guys. A SOLDIER. Awww, snap. He cares so much for Ren and he's not perfect, but he's wonderful anyway.

Dean: THIS IS MY BOY. MINEMINEMINE. So, I know I just said Axel was the sweetest, and I'm not taking that back, but Dean...ahh, Dean made me laugh. If you know me AT ALL (especially in person) you'll know that laughing is what I DO. I laugh way more than I probably should, but I'm cool with it. Anyway, Dean is so funny. And even though he's not exactly a perfect gentleman, he has a kind heart. This mostly came through with Ren. Which I loved to see. All in all, I adore Dean and he just makes me completely happy. <3

Joshua: I'm only going to take a second here to say that Joshua? Yeah, he deserves some kind of award for being a fantastic big brother. Seriously.

Plot. This book made me flip out. On more than one occassion. I was just so caught off guard sometimes. The storyline of this book is not something that can be guessed, really. I tried, and more often than not, something else happened and I was left sitting here like "Whaaaa?"

Romance. Romance, sweetness, the feels of my heart, whatever you wish to call it, I'm going to talk about that for a second here. Okay? AXEL AND REN NEED TO BE TOGETHER. I love Dean, adore him, he's totally mine, but Ren and Axel are just incredibly sweet and goodness knows how I love sweet things. 'CAUSE I DO. Ren and her stubborness mixed with Axel and his adorableness (may also be called "sweetness," but I'm trying not to overuse the word) created the most amazing couple and I want more. I. Want. To. Read. More.

The ending. NDRIGBAIERGIARBGIPAEWHB!!!!!!!!!! I canNOT believe this happened and, um, hey. I need the next book. Like...heh, NOW. There is something that's kind of a cliffhanger, but not too bad. You're not going to die in suspense. BUT, you will want more and there isn't more yet so you'll be like how I was at the beginning of this section, NDRIGBAIERGIARBGIPAEWHB. We shall all live, though, and I loved the feels I got from this ending.

Overall, Priya has written a book that makes me so happy! I had fun while reading it, fell in love with the characters, and want more so flipping bad. MOREMOREMORE! Can't wait for Book 2!