Today, I get to be one of the awesome bloggers revealing the cover for Dracian Legacy by Priya Kanaparti. I am immensely excited about this. Why, you ask? Weeeell, this author is one of the super cool ones I talk to on a regular basis. She's super cool. Plus, Dracian Legacy? Is a book I've been DYYYYIIIIINGGG for since the second I got the email about this book. The cover reveal puts us one step closer!
So...let's reveal, shall we?
Dracian Legacy by Priya Kanaparti 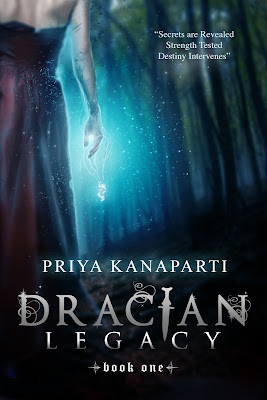 Ren and Axel are caught between two powerful magical races: one destined to end the bloodshed, the other out for vengeance.

Seventeen-year-old Ren Pernell is prophesied to end the war between the Dracians and the Telalians. So when a Dracian, Axel Knight, is sent to find and bring back the prophesied one before she turns eighteen and Telalians discover of her existence, unexpected sparks start to fly between the two. Once Ren finds the truth behind Axel’s arrival, she wants everything to do with him and nothing to do with his mission.

Things prove to be difficult as Ren’s life is constantly threatened by forces that are beyond her control, including the leader of the Telalians. With the clock ticking and Ren’s life in jeopardy, it is no longer just a mission for Axel. It becomes a personal endeavor to save the only one he’s ever loved. In a heart racing ending, they must find a way to evade the preordained war that won’t also end Ren’s life.

All right. Let's be honest for a second here. Is that cover gorgeous or is that cover GORGEOUS?!?!! And that blurb...can I have the book now, please? PLEASE?

Okay, now I'm going to info-dump you guys. Why? Because I can. And because I have zero tact right now. I'm tired, my good people. I apologize. Midterms are almost over. Then I'll be back to my wonderful self that sleeps all the time so she can be not-tired when she attempts to blog.

Priya Kanaparti was born in India, grew up in Detroit, and is now living in Boise, ID. She attended Wayne State University for her undergrad degree in Bachelor of Science in Biology, and University of Phoenix for her Masters in Business Administration. Priya works as a project manager in software field during the day and lives in the world of her characters during the nights and weekends. She had found the love for reading and writing early this year, when she stayed home with her year old and needed something to occupy those 'downtime' hours.
She loves playing tennis on a good summer day and chess during the cold winters, but reading and writing has become a year round hobby.
She lives in Boise with her husband, son and a Yorkie. Dracian Legacy is her debut novel.