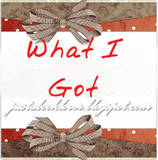 What I Got is a weekly meme hosted by the lovely Monica over at Cover Analysis!
Okay, so. I haven't done a What I Got post in a few weeks. Because I'm lazy. Plus, I've been a wee bit busy with, you know, LIFE. Now, add Christmas on top of no posting, and...urm...well, you get A LOT of books. So bear with me, people. And since I have SO. MANY books, I'm not really linking anything. That would take FOREVER.
First thing's first--review books!
For Review: 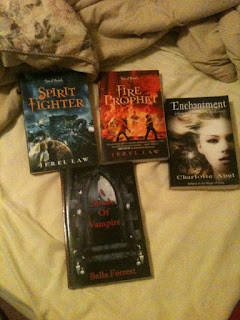 Who I Kissed by Janet Gurtler
Thank you, Netgalley. This book reminds me so much of Kiss Me, Kill Me by Lauren Henderson, but still. Looks good. Plus, there's obviously kissing, right?
Spirit Fighter and Fire Prophet by Jerel Law
These are for a blog tour! My stop's...sometime in the beginning of January. I have it written down somewhere. So yeah. I got these. Mythology!
Enchantment by Charlotte Abel
I happy danced when I got this book. This one's also for a blog tour, around the end of January, I think. I have that written down, too.
A Shade of Vampire by Bella Forrest
I already read this book and OHMYGOODNESS, I NEED THE NEXT ONE. Review shall be posted sometime relatively soon. It was so good, guys!
Nobody But Us by Kristin Halbrook
I have been trying and trying to get an ARC of this, so I was ecstatic when I got on the blog tour for this. I can't wait until I get a chance to read! This will probably be one I get a finished copy of ASAP. Or maybe I'll give one away sometime. Or both. Either way, I already heart this book so hard, and am so glad I have an eARC.
Defy the Stars by Stephanie Parent
Stephanie Parent is amazing, guys. I can't wait to read this oneeee!
And I THINK that's all the books I got for review. Now let's do books I got from the Opal release party...
Bought/Won 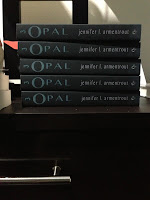 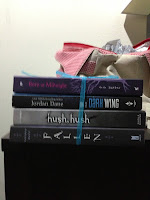 Opal by Jennifer L. Armentrout
We actually got seven copies. But the other two were in the car at the time. So yeah. These have mostly been dispersed. Now, I only have two in MY possession, and two more at my brother's house. But my copy... 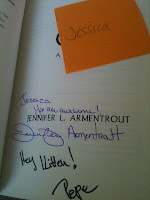 There it iiiiiis. I love it. And of course I've already read it. I'll be reviewing it sometime, so keep a look out for that. And there will probably be a lot of gifs. Just so you know. ;)
Born at Midnight by C.C. Hunter
My friend Jodie won this at the dinner after the signing and gave it to me since she already owned a copy. It's signed and I cannot wait to reeeeead!
On a Dark Wing by Jordan Dane
I won this one meeeself. Again, I'm excited to read! And it's signed.
Hush, Hush by Becca Fitzpatrick
Signed. And I'm so glad to own this book! I own the second book, but borrowed the first from a friend. Now I just need the last two....which I have NOT read yet..
Fallen by Lauren Kate
Signed. And I own Torment and Rapture, so I ALMOST have the whole series. Oh, and I won Fallen, On a Dark Wing, and Hush, Hush. So thanks to whoever gave those to give away at the dinner!
I got a bunch of other stuff signed at the Opal release party, too, but that's all that was NEW.
Now...Christmas? Yeah. I think it's time for Christmas books.
Gifted: 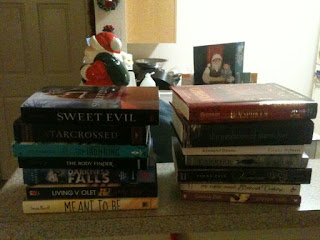 I know, not the best picture. But I'm listing them, too, so all should be well.
From Katie, my secret Santa:
Sweet Evil by Wendy Higgins
I know, I know. I'm INSANE for not having read this book yet. But now I have it. Which means I'll read it sometime. So hold the tomatoes or rocks or whatever it was you were preparing to throw at me. Yes, that includes YOU, Priya. *narrows eyes*
Starcrossed by Josephine Angelini
My library has the second book in this trilogy, but not the first. *facepalm* So I'm glad to have this one! It has mythology, right? I like that.
From Jasmine, my OTHER secret Santa (who I met and is totally awesome):
The Iron King by Julie Kagawa
I've been wanting to read this series. Sounds good. So the first book is a MARVELOUS place to start, if you ask me.
The Body Finder by Kimberly Derting
This is another library mess up. Has the rest of the books in the series, but not the first. And these books look so good, too! So now I have it. Yay!
From my bestie, Vicki, and Mamabear:
Darkness Falls by Cate Tiernan
This book has been on my wishlist for a long while now. So yeah. And I could never find it anywhere! Of course, until today, AFTER I got the book from someone else. Now I'm going to need the last in the trilogy, Eternally Yours... My birthday IS mighty close, you know...
Living Violet by Jaime Reed
I know diddly-squat about this book. But Vicki chose it, so I think it'll be pretty nice.
Meant To Be by Lauren Morrill
This book looks so, so, SO cute. I'm excited to read this one. Seems like a sweet contemporary.
From Billy & Angie (kind of. They gave me a B&N gift card. This is what I bought):
Unspoken by Sarah Rees Brennan
I LOVELOVELOVE Sarah Rees Brennan. No lie. Her Demon's Lexicon trilogy is a huge part of why I started my blog in the first place. But THAT is a story for another time. I promised her at ATBF back in September that I'd buy this book (since they were sold out there, darn it) and now I've kept my promise. Plus, friends (Jessirae and Jena) tell me it's an AMAZING book. *squee!*
The Evolution of Mara Dyer by Michelle Hodkin
I'm so glad I own this book. I WISH I owned the first book. But I have read it, and I love it, and now I'm pumped to read the sequel. It looks so great!
From Carmen, because she's flipping great:
Entangled Dreams by Carmen DeSousa
This book was on my list I made in my letter to Santa. As was Unspoken, but still. I can't remember everything on that list right now and am too lazy to look it up. The POINT is that Carmen sent me this book, signed, and she's an awesome person. Mhm. Yeah.
From Jessirae, whom I heart so hard:
Carrier of the Mark by Leigh Fallon
She saw this on my wishlist and gave me her copy because she's the freaking BEST.
Venom by Fiona Paul
She had an extra and was the bestest enough to give it to me! Did I mention that I heart her? Because I DO.
Here's all of what she gave me: 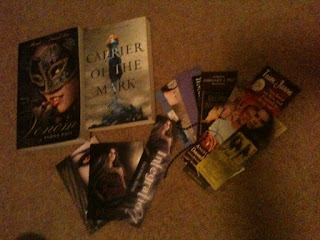 OH, and there was a magnet, too. But it's on my fridge...heh.
But that's what Jessirae gave me. HEART.
From my best Lux-loving friend, Jana:
My Super Sweet Sixteenth Century by Rachel Harris
Jana adores this book, so I just KNOW I'm going to have fun with this one. I had a signed book plate from Rachel Harris, too, so I'm glad to finally have somewhere to put it! She's the sweetest. And Jana...I love this chick. BEST FRIENDS, right here.
From my ARCycling secret Santa, Janine:
Saving Zoe by Alyson Noel
I'd never given this book any thought at all, so I'm kind of intrigued now. I did not like the Immortals series by Alyson Noel very much (the first book was good, but the second book was NOT and it was downhill from there), but I have a friend (hey, Dolly!) who is a fan. So I'm going to give it a shot sometime. If not, the book will probably go Dolly's way.
Thank you so, so, so, SO FLIPPING MUCH to everyone who sent me/gave me stuff. I love it all so much. Now I just need to sit down and, you know, READ it all.
And to my lovely blogger friends, you are all the most amazing. THE MOSTEST. <3
But, aha, there are still more gifts...
Gifted ebooks:

The Secret of Ella & Micha by Jessica Sorensen
I was talking about this with my wonderful friend Jessirae, and then she just decided to gift it to me. I spazzed. Did I MENTION how much I heart her? So I have this to read sometime. I said this on my top 10 covers of 2012, but I'll say it again here: that lip piercing is so freaking hot. Sorry, but it's true. I love this cover.
Down To You by M. Leighton
I was talking about THIS with Priya Can I Party? Kanaparti (who may or may not be one of my favorite people--I refuse to confirm or deny) and SHE decided to gift me this. Out of nowhere. I spazzed again. P-DIDDIO, YOU'RE AWESOME. Hehe. I've heard the greatest things about this book (from Priya and Jessirae, mostly), and I trust them. so I'm excited to get into this one!
Significance by Shelly Crane
OHMYGOSH, GUYS. I've wanted this book for so long I can't even tell you. And then the spectacularly magnificent Stephanie Parent gifted it to me. At this exact moment, I'm reading it. And I always adore the idea of soulmates, so of course this book is making me sooooo happy. Now I'm going to need the rest of the books...AHHH. *happy dance*
THANK YOU THANK YOU THANK YOU! to everybody. Y'all are so fantastic.
Goodness, I'm running out of adjectives.
Good thing I'm done here. Chances are, I've missed something. But we're going to have to live with it because I REALLY want to read right now. And go hunt some more in the Shortie Says Holiday Hunt. So much fun! (Button's around the top of the right sidebar, FYI.) Can you believe I only found Jena's blog a couple days ago? *headdesk* Anyways, yeah. I'm going to do stuff.
What awesome things did YOU get?
Hope your holidays were great, too! And....goodness, this is so NOT a smooth ending to this post. *sigh*
♥Jessica(:
Posted by Jessica @ Stuck in Books at 12:07 AM

Email ThisBlogThis!Share to TwitterShare to FacebookShare to Pinterest
Labels: AH, holidays, What I Got